In April of 2008, shortly after Apple released Safari 3.1 with webfont support, we announced the free download of Graublau Sans Web—one of the first professional webfonts specifically released for @font-face use on websites. 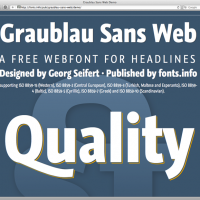 At this time, the download kit only included two OpenType fonts, which could be used in Safari. Our goal was to support the “webfont revolution” and hopefully someday have a full webfont support in all browsers. Today, this is already true. All current browsers have webfont support—even though this support is usually achieved by providing different webfont formats.

Since Graublau Sans Web is still a popular typeface for websites, we decided to update the download kit. Now it includes all common webfont formats (TrueType, WOFF and EOT).