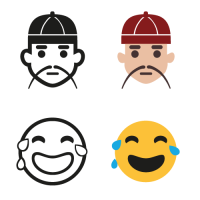 Color fonts are by no means a new idea. When Adobe invented PostScript their Type 3 font standard allowed to specify colors within a font and Fontlab’s bitmap-based Photofont technology is also around for years. But the makers of operating systems and apps never really cared about these technologies—until the major success of the Emoji character […]

Back in 2008 and 2009, when webfonts in standard font formats became technically possible, most font foundries were still in denial about this technology. If there would be no real protection for fonts on public servers, they just did not want to take part and offer their fonts. But a few people with background in […]

You might have noticed, that in my current blog layout all lines of the headline always perfectly match the width of the blog layout, even if the size of the browser window is changed. In case you are wondering, here is how this was achieved … Tweet

In April of 2008, shortly after Apple released Safari 3.1 with webfont support, we announced the free download of Graublau Sans Web—one of the first professional webfonts specifically released for @font-face use on websites. At this time, the download kit only included two OpenType fonts, which could be used in Safari. Our goal was to […]

“Why Type Designers and Web Designers are Incredibly Similar and Should Really Get a Room Already.” (Webstock ’12) Tweet

Using webfonts to insert characters or symbols in a website—Or why is Opera screwing up my font stacks? Back in 2008, shortly after Apple started the new webfont revolution with the release of Safari 3.1, I wrote an article about how the webfont technology could be used to insert certain glyphs or vector objects like logos […]

The idea of the Google Webfonts Directory is great: offering everyone free webfonts, which you can include in your website with just one line of code and without worrying about the multiple webfont formats, subsetting, file size, download speed and so on. When the service started in 2010 it offered just a couple of fonts. […]