One of the weaker arguments against a Capital Sharp S (ẞ) has always been, that such a new character cannot become widely accepted, because there is no easy input method for it on a regular German keyboard. But this point has now started to become moot. The keyboard maker Cherry has starter mass production of a German keyboard that includes the Capital Sharp S directly visible on the key and easily accessible with a simple and standardized shortcut. 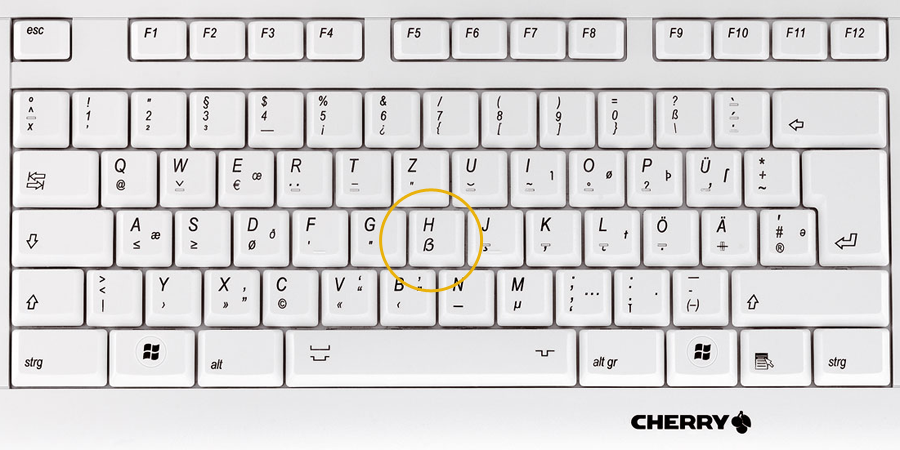 You might wonder, why the capital ß is not placed on the key of the lowercase letter and accessed with the shift key, like any other capital letter of Latin alphabet. But the way this keyboard layout works, is actually the reason why there is a pretty good chance that is will become successful. Alternative keyboard layouts (like the Dvorak layout) have been proposed for decades, but they never had any chance to replace the usual QWERTY layouts used in billions of devices around the world.

But the layout used for this Cherry keyboard is different. It’s not an alternative layout, it’s just an extension. And this makes all the difference and that’s why the Capital Sharp S cannot be reached with SHIFT + ß, where the question mark is placed on a regular German keyboard. The keyboard layout you see here is called T2 and there is an official German norm (DIN 2137) behind it. The T2 layout doesn’t change a single keyboard shortcut from the regular German layout (DIN 2137-T1), it just adds new characters to previously unused shortcuts. Now Windows users can finally also access diacritical marks, correct quotation marks, different horizontal strokes et cetera as easy as on the Mac. And since the T2 layout is just an extension of the regular German layout, people can use it instantly without having to learn a completely new layout first.

More information about the Cherry Stream XT T2 keyboard can be found here.

The Work of Emil Rudolf Weiß