When we come to a new city we build a cognitve map to represent this city in our minds. Unless you have photographic memory such cognitve maps work differently from topographic maps. They don’t consist of exact representations and distances, but are driven by landmarks and the paths that connect them. A landmark can be anything that clearly stands out from its environment, like a tower or a church. But one of the most important landmarks are rivers that divide a city. London is divided by the Thames, Paris by the Seine and Vienna by the Danube.

Last week I visited Vienna for the first time and experienced a typical wayfinding problem that always annoys me. From my hotel I wanted to make a sightseeing trip to the city center. I went to the closest subway station, paid my ticket and looked for a map to find out where I have to go. As you can see on the map, Vienna is divided by the river Danube. Since my hotel was close to the river I had no problem finding my position on the map, even though there was no You are Here mark. 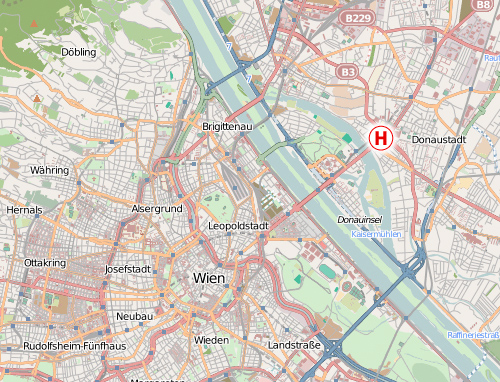 The city center was also easy to find and I can easily place it on my cognive map. It’s across the river and Southwest of my hotel. 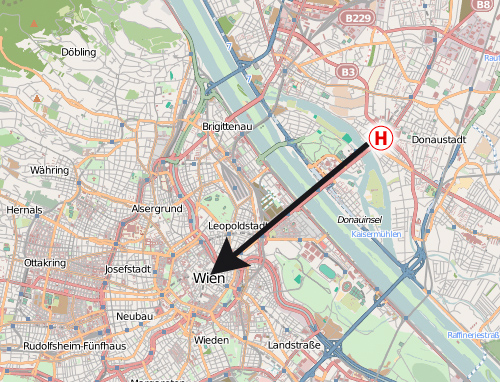 A subway line is directly connecting my position with the city center, so the only question left is which platform I need to take on this line. I know I want to go across the river, Southwest and to the city center—but none of these information is given to me. Instead I get: 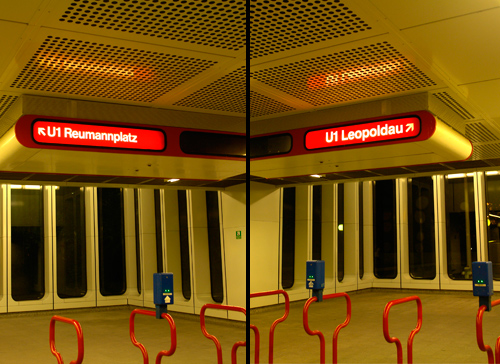 Do I want to go Reumannplatz or Leopoldau? Well, neither! I want to go across the river, Southwest and to the city center…

So I need to check this huge and very detailed map again to find those terminal stops. From a cognitive perspective this is really a problem. Especially tourist will never visit those terminal stops, so to them they are meaningless, hard to remember and hard to place on a cognitve map. But cardinal directions and landmarks are basic tools of navigating thru the environment and would make it much easier to travel around an unknown city. What about an additional information which of those platforms leads to the Northeast and which to the Southwest? Even a simple circled SW and NW would probably suffice.

But getting on the right platform is not the only problem—it continues when we want to exit the subway. I got off at my stop in the city center. It’s a large subway station and after walking thru the subway catacombs I will usually have lost my sense for the cardinal directions again. From the topographic map I looked at in the other subway station I know I want to go Northeast from the station and stroll thru the city there, but what I get is:

Do you want to exit to Kärntner Straße or Graben? Well, I don’t know! I want to go to the Northeast! How should I know all these street names as a tourist? And even if I would know the right street name, without cardinal directions I wouln’t even know which direction I should take on that street. So I need to consult a topographic map again to check random street junctions which might help me determine in which direction I am currently standing. A simple compass rose on the ground would have made it much easier…

It’s not a secret how cognitve maps work and how tourist move thru a city. But it seems that the signage of most public transport systems don’t really reflect that. They seem to be more driven by a strict and logic engineer’s approach, rather than how people actually use these systems. What are your experiences? Am I the only one who wants to rely on landmarks and cardinal directions when navigating thru a city? Do you know cities with a signage system that accommodates our cognitve maps in a better way? In which cities do you got lost and why?