The support for the German Capital Sharp S character (ẞ) on desktop operating systems is already quite good, considering the fact that the Unicode 1E9E was assigned just four years ago and that the need for this character is a pretty local and still controversial subject. On Windows all major system fonts like Arial, Times New Roman, Segoe UI and Verdana are equipped with an ẞ since Windows 7. On Mac OS the only official Apple font which has a (pretty ugly) Capital Sharp S is Geneva. But even if a text is displayed in a typeface like Lucida Grande, most users will see the character anyway, since many apps will just pick the missing character from a different font like Arial.

In addition to system fonts, a growing number of commercial font families (currently over 200)  and OpenSource fonts like Linux Libertine provide support for the ẞ character.

On mobile devices the support is still pretty much non-existent. Which is rather disappointing since the use and discussion about the ẞ character mainly happens on websites and social networks like Facebook and Twitter. And even if you don’t like the idea of a Capital Sharp S use for German text, you should be able to see it in a Tweet and not a NOTDEF square, which tells you nothing about the missing character.

Surprisingly only the Symbian phone shows an ẞ from a fallback font. iOS and Android neither have it in their default fonts, nor do they show a fallback character from a different font. As expected, Windows Phone devices show the ẞ in most fonts correctly, as it they are using the same fonts as the Windows on desktop computers.

I have set up a test page to check the Capital S support in the browsers of mobile devices. 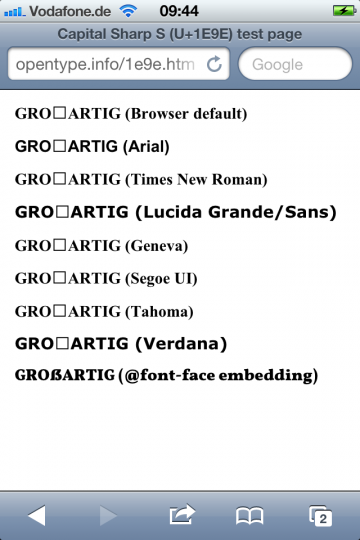 Try it on your device

On my own iOS 5.1 device (see screenshot), the only way to see a ẞ is using a webfont, but many apps will use the default fonts on the device and therefore not show the character. I am curious: Does your phone already support the Capital Sharp S with pre-installed fonts? If so, please leave a comment.

Update, November 2013: Since iOS 7, there is still no Capital Sharp S in the default versions of Helvetica, but at least there are fonts on the phone which have an ẞ. These glyphs should show up in almost all apps as fallback substitution.